IoT Solutions: What Language Does Your Wristband Speak?

Believe it or not, people are not the only ones who are using the Internet. Actually, we are the minority. According to IoT Analytics, there already are over 7 billion connected devices, and that number will continue to grow.

It’s worth saying that IoT goes way beyond smart watches or automated lighting. It includes a massive ecosystem that allows gadgets to communicate with each other, share commands, and analyze incoming data. Let’s take a deeper look at what IoT truly is.

Even though IoT seems to be something different from everything we’ve known before, it’s not.

The IoT architectural environment can be divided into 4 major groups:

In this chain, only sensors may require coding on a low level. Other elements are not much different from regular desktops/smartphones running on a regular OS. In other words, choosing the language for Internet of Things is not much different from selecting it for “Internet of People” or a regular desktop app. Thus, it’s quite predictable that our list consists of languages we all know and love.

Most popular languages for IoT development

Since there are not many differences between coding for smart devices and regular computers, developers are free to select languages that they are comfortable with. However, some appliances still put some restraints on the process due to having limited resources and computing power. Let’s look at the languages that have become a “golden middle”.

Surprised? Bet you aren’t. Java feels like it was made for IoT, mostly due to its core principle: write once, work everywhere.

Its portability has become a massive advantage for software engineers. They can simply write and debug the code on their laptop and then move it to another platform with a Java Virtual Machine.

Some time ago, Oracle started producing separate versions of the language designed specifically for embedded systems. Java SE Embedded might be the most vivid example of this solution. The main differences from PC-based Java were in memory usage and communication. Embedded code was contained primarily in flash memory and received commands through the network instead of a keyboard.

Since Java 9, such separation has become unnecessary, so Java SE Embedded was replaced by the Compact Profile support via JEP 161.

When computing power is limited, mid- and low-level languages become true helpers. C is closer to machine code than other languages listed in this article. It requires less resources and can work directly with the RAM.

Additionally, it is widely applied to microcontrollers and is ideal for programming sensors and gateway applications.

Lower level also means greater flexibility; you can fine tune every part of the code to reach peak performance. Just make sure the person doing this is rather experienced and fluent in best practices. Hardware-layer coding is like heart surgery; you shouldn’t trust it to someone with shaking hands.

When a device’s memory volume and computational power increase, developers become less constrained by toolset, which means that they can shift to languages they’re more comfortable with, and it’s hard to recall a more “comforting” language than Python. It’s laconic, intuitive and readable, so it’s not surprising that so many people choose it as a “first language to study”. Python’s clear and short syntax allows for the creation of a program with minimum lines of code, which is also a big plus to productivity.

Additionally, Python has proven itself useful in data analysis, so if a smart device has to manage and analyze complex data streams, Python is a great tool to handle it.

Taking into an account all of its advantages, it’s not surprising that today’s most popular microcontroller, Raspberry Pi, uses Python as a main language.

JS seems omnipresent these days, and IoT is no exception. According to the latest Eclipse survey, over 40% of engineers use the language in their projects.

Over the last few years, Node.js has become an extremely popular tool for server-side development. The same features have made it applicable for Linux-based smart hubs and sensors.

There are already a few microcontrollers that use JS as a main language. Espruino and Tessel insist that running their products on Node.js makes it easy for web developers to program their controllers.

Since so many smart appliances are controlled by smartphone, they should have the ability to communicate properly. If you want your gadgets to interact flawlessly with your iPhone, they should speak one language: Swift.

Apple has been aiming to build a strong smart home ecosystem around their smartphones and has already introduced an infrastructure and some libraries that are the basis of its HomeKit platform. Thus, it’s not surprising that more and more iOS-compatible devices are emerging on the market. Their number will only grow in the future.

You probably didn’t expect to see PHP on this list, but it’s surprisingly popular in IoT development.

Many engineers put the full LAMP stack on microchips, which helps make coding fast and simple. And as long as chips keep becoming more powerful, high-level PHP can easily compete with low-level C for dominance.

Microchip manufacturers have rapidly caught up with the idea than not only programmers program their products. Therefore, many controllers offer their users an opportunity to adjust them without any line of code.

This is done with specific tools that allow users to build vivid working algorithms instead of coding them. The algorithms are later interpreted into code and applied to chips.

Another thing to mention is that languages considered popular aren’t necessarily used within the whole ecosystem. Some languages, like C, are mostly utilized on a sensor level, while hubs and servers run on a totally different language.

The image below shows TOP languages based on the subdomain of IoT development. 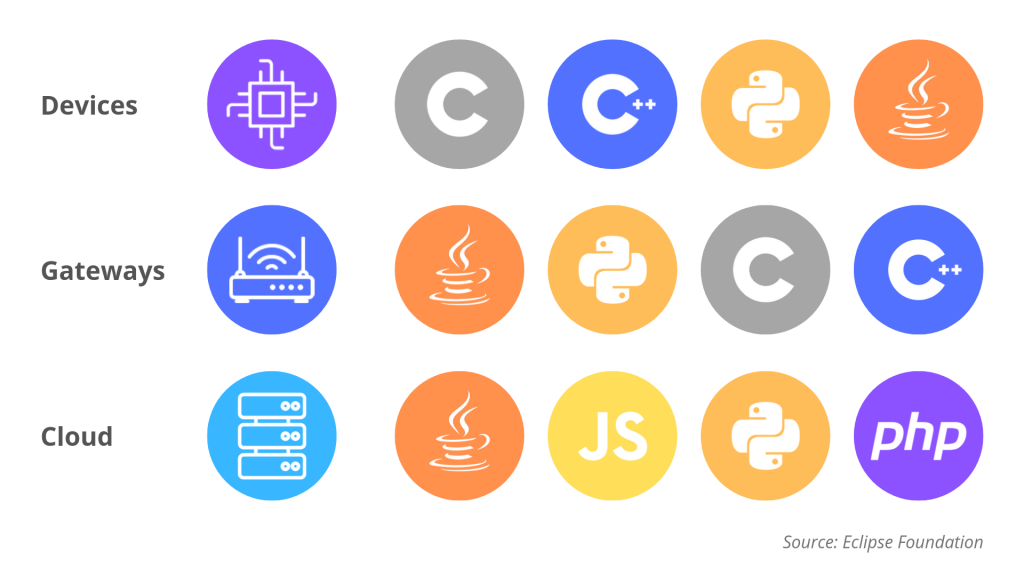 Now that you know what language your smart tech speaks, you can look for the right “interpreter” to control the conversation.

At Intersog, you’ll find seasoned professionals with expertise in any of the listed languages. They’ll gladly help you with your project. Contact us for details!